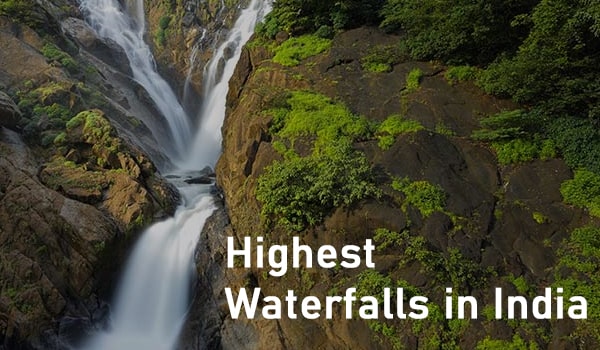 India is one of the best examples of nature’s craft.

Waterfalls remain on the first of the list with beautiful specimens of nature, where the water flows downstream and then crashes into a bed of rocks may feet below.

The list below comprises the highest waterfalls in India. Most of them are found in the mountains area of North East India.

The Kunchikal Falls is found in the Shimoga district of Karnataka, in the Agumbe Valley. The height of the fall is 1493 feet, making it the tallest waterfall in India. The fall is formed by the Varahi River and lies in the western ghats.

In India, Agumbe Valley is among those places where they receive very heavy rainfall, and the permanent rain forest research station in India is located here.

The falls are situated amidst an abundant rain-forest, verdant from the perennial rain. The area is famous for squirrels, reptiles, a variety of unique birds, rare reptiles, etc.

The Barehipani Falls is right in the center of Odisha’s Simlipal National Park in Mayurbhanj and stands at 1309 feet. It is situated on the Budhabalanga river which flows into the Bay of Bengal.

It is tucked beautifully in between the deep, green forest making it ideal for a visit by trekkers and nature enthusiasts. This waterfall is known for its beauty that it adds to Orissa.

The Nohkalikai is one of the highest waterfalls in India, standing at 1115 feet above the ground. The name comes from the story of a mother named Ka Likai who jumped off the edge of the cliff and turned into this beautiful waterfall. The famous places in Cherapunji are the hills, rainfall, living bridges, and oranges.

It is supposed to be at their absolute and beautiful best during the rainy season for obvious reasons. At the base of the waters is a pool of strangely green, unpolluted water.

In Meghalaya, the Nohsngithiang falls is one of the largest waterfalls in East Khasi Hills. This fall stands at the height of 1033 feet. You will find when you walk in the opposite direction from the village opposite to the falls that the Mawsmai falls are divided into seven beautiful parts.

Due to the illumination of sunlight on the waterfalls makes it look beautiful, and the vibrant colors of the setting sun on the waterfalls look even more beautiful. Over the top of limestone cliffs of the Khasi Hills, the falls plunge which is appeared only during the rainy season.

The Dudhsagar Falls is also known as The Sea of Milk and is an incredible sight. The water flows from a height of 1020 feet and attracts tourists away from the Goa beaches, especially in monsoon season.

The beautiful waterfalls are formed between the Karnataka and Goa states border.

Deciduous forests with rich biodiversity surround the area. The falls are not especially spectacular during the winter season, but during monsoon, however, the falls are fed by pours forming an enormous force of water.